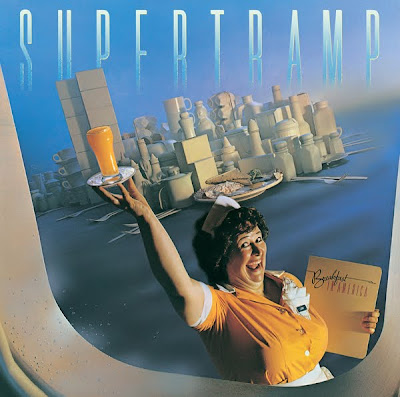 Got up, went downstairs and had breakfast at the upscale diner on the ground floor with our friends. Decided to go for a run on the world famous Atlantic City Boardwalk. Ran to one end, then up to the other and back again. I thought that was pretty great.
In the afternoon it was time for happy hour and everyone met on the 5th floor lounge. Jules and Miranda were dressed up as retro waitresses (looking uncannily like the cover of Supertramp's Breakfast in America album cover), serving Philly soft pretzels while everyone grabbed drinks, played pool and chatted each other up and caught up with old friendships.
At 7, we went to the ballroom for the spanking party. There were all sorts of appetizers available (though I got there late and they were gone, gone, gone!). Some of the most beautiful women in the scene did a fetish apparel fashion show with my own Gia in a sexy baby doll that made her look splendid.
Right next door was a large room divided into little cubicles where people could go for a little semi-private OTK. Before getting there I thought this would be unnecessary and silly, but it was so convenient and a great way to break the ice without "committing" to go upstairs to someone's room. Safe and convenient. I ended up playing a few lovely ladies before arriving at the time to play with someone I'd been wanting to play with for a very long time. She and I went up to her room and we had a light, fun and good scene together. By the time we were done, the party downstairs was over and people were moving up to the suite parties, so we went to the penthouse to experience the fun there.
Arriving late (again!), the hoagies were already picked over. Argh! I'm hungry! Had fun with a few public scene at the party, playing with Lizzie, Jada and others. What a great evening. Rolled into bed after 2...
Posted by Craig Aych at 5:20 PM 10 comments:

I forgot to add two quick comments from my Day 1 report.
Posted by Craig Aych at 5:16 PM 2 comments:

Flying out from Los Angeles my wife (new scene name! Gia Belle!) and I arrived in Philadelphia to be picked up by dear friend Brad who had driven up from his hometown for the party. He and his wife and Gia and I all enjoyed conversation and laughs in Brad’s van on the way to Atlantic City.

When I next checked my watch it was after 2 am and I really wanted to pace myself, so Gia and I headed off to bed for more fun and frivolity the next day. After all, the party wasn’t to officially start until Friday!

Revving up for Atlantic City Part 2

For those of you not attending Boardwalk Badness Weekend in Atlantic City this coming weekend, I'll be doing one of my post-party reports as I've done in the past. But for now, it's all about the anticipation and the preparation.
I may have to turn in my membership to the Guy Club, but I'm thinking about what I'm going to wear. Toppy but casual? Too much black? Slimming but loose enough to remain flexible. No white pants. (Why? Well, you don't want your bottom's spray-on tanner coming off on your slacks during a particularly heated OTK. You know who you are! ;-) ) Then there's the implements. What to bring? All the spanking stuff, sure. But there's also the BDSM-y stuff for those ladies, the sensation play stuff for those ladies, and the really kinky stuff for those ladies. Ha. Gotta condition that stuff, pack it up, get the cleaning solutions together. Gotta make sure you don't forget anything.
My wife, a switch, has it much, much worse. Not only does she have to worry about what to wear, she has to think about stuff that can be both toppy and bottom-y, sexy and serious. So it's sort of a double-packing issue for her. Then there's also all the implements she brings. You should see our luggage for a weekend. Looks like a week's worth of stuff.
Of course, it's all worth it. We play like crazed college students on a bender, getting up late, eating like fiends to catch up on energy, sharing our previous night's adventures, mentally gearing up for our next play session, staying up 'till 2, 3, 4 am. Instead of beer bongs it's paddles, however.
And when it's all over it's party drop. Sometimes it's easy, sometimes it's hard. You spend days (if not weeks or months for some--and you know who you are!) gearing up. There's the mental energy put into the prep to play, the exhaustion both mentally and physically from the actual play, the adrenaline that peaks and ebbs and the resultant physiological shift that ensues from that. There's the anticipation of the new: what's going to happen at the party? Who am I going to meet I haven't met before? Will there be drama?
Of course, there's also the renewing of old friendships, the introduction to new, the closeness you share, the camaraderie of being together with a buncha really great weirdos like yourself.
And then it's over. The anticipation done in a blink of an eye. And you're on a plane, train or car (or all three!), exhausted, happily sleeping it off like a frat boy...a really kinky, sore-handed frat boy.
Posted by Craig Aych at 10:20 AM 20 comments:

The whole idea of shipping my implements and clothing to Atlantic City in advance of me arriving from overseas was bugging me. Add to that my misgivings about coming to a party in which all-nighters are the norm after having flown across the Atlantic from being in another time zone for a week was stressing me out. I was also getting concerned about being able to "switch gears" with no downtime between international work trip and OTK.
Fortunately, that's not going to be a problem any longer. My UK trip got cancelled, so I'm free and clear to enjoy my regular hectic work week in L.A. rather than fly from London to Philly and straight into Boardwalk Badness.
Like I said, "Whew!"
Posted by Craig Aych at 7:10 AM 16 comments:

The Role of Role Playing + a Non-Kink Topic

As Boardwalk Badness rapidly approaches and conversations are flying about play dates, sessions, scenes and the like, the subject that comes up most frequently in the spanking world is role playing. Help me out, people. I don't get it. Never have. I can get "angry" and toppy and ominous and all that. I don't consider that role playing. It's when I hear about teacher/student, doctor/nurse (or patient), dad/child (ew!) and every other permutation that gets me feeling all squicky. It just doesn't feel natural to me. In fact, it feels extraordinarily contrived. Further, any notion of a grown woman acting like a student, child, altar boy--whatever--just makes me feel squickier. (And thanks to Jada for helping me remember is "squicky" and not "squingy.")
As I always say, you do your thing, I'm not going to judge. I'm just telling you how I feel about it. So, to manage some expectations as well, I won't be doing it. Again, happy to get all toppy and dour and threatening, but no:
Okay. Got that off my chest. Good.
Now onto one other topic:
As you all know I travel extensively for my job. I am going to have to go to London the week before Atlantic City, so I'll be flying into Philly and meeting my wife at the airport to get into AC Thursday evening. I hope I won't be all jet laggy. I started thinking about the logistics of this. I can't take my AC clothes and implements me to London and then onto AC. Heathrow, since the whole shoe bomber thing, is practically on Standard Operating Procedure for rectal exams, let alone the whole (in a British accent), "Explain again what 'vampire gloves' are supposed to be?" So I'll be shipping my gear and weekend clothes ahead to the hotel. The things we do for play, eh?
See you in Atlantic City!
Posted by Craig Aych at 4:31 PM 14 comments:

Revving up for Atlantic City

With only two weeks remaining, things are starting to rev up for Atlantic City and Boardwalk Badness. I'm turning my attention on setting up private play, reconnecting with old friends, making new connections. It's exciting, after all these parties, to have people I know to play with and people my wife knows who want to play with her. It was a little over a year ago we were at ShadowLane, total strangers to the party scene, knowing no one and knowing no way as to how to connect. Now, we have our cadre of friends, play partners and chemical romances. Can't wait...
Will you be there?
Posted by Craig Aych at 10:51 PM 10 comments: 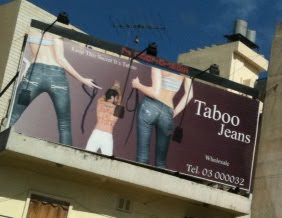 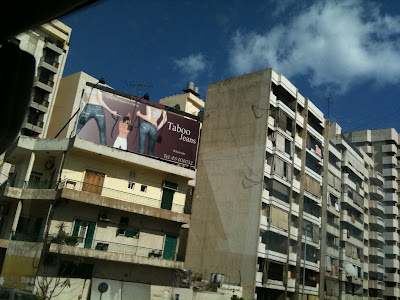 I travel a lot for business. I just got back from the Middle East, visiting Dubai, Abu Dhabi and Beirut. On the way from the airport into the city in Beirut, I saw the below billboard. Couldn't believe I was seeing it in a Muslim country, but Beirut is extremely liberal and is considered a "party city" for the Arabs. Didn't know it was also a "kink city." Here's the billboard and the detail. (The girls have lashed the words, "Love & Taboo" into the Arab man's back.)
Posted by Craig Aych at 10:45 PM 6 comments: