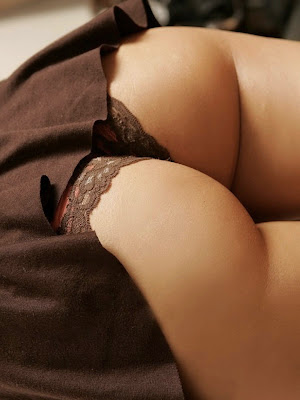 "Haley!" she heard him hiss from the great room. Startled, she got up from her window seat in the master bedroom where she was reading her Kindle, moving like she had been struck by lightning.


Wide-eyed, she found Kris standing in the middle of the room, a negligee crumpled on the floor at his feet. His look was almost comical, shooting glances down at the offending piece of lingerie and up to glare at Haley. She knew better than to even stifle a laugh.

"What?" she asked, all innocence betrayed by the ever-so slight curl of smile on the corner of her mouth and the twinkle in her eyes that were a pure tell she knew she was in trouble--and liked it.

"Why are there here? On the floor?" he asked, eyebrows raised.

"That's where I dropped it when I took it off when you were going to, um, you know...?" she said quietly, sheepishly.

"You're still to pick up after yourself, even after I bend you over the back of the sofa, pet." He smoldered. Haley scampered over and pick it up.

"Okay now. Done!" She did one nod of the head and turned to get out of the room as quickly as possible.

"Not. So. Fast." Haley froze. Then she felt his tight grip on her wrist as he spun her around. "You think you're going to get away with that so easily?"

Kris grabbed a handful of hair and manhandled her over to the back of the same leather couch he had fucked her over not 12 hours earlier. "Hey!" she protested, but Kris didn't care. He yanked up her thin nightshirt, saw she was pantyless, and began a flurry of hand spanks that seemed to go on for nearly 30 minutes in all kinds of harsh varieties--rigid and firm, cupped and thuddy, the "fingertip sting" she hated so much and the dreaded "sweet spot repeat". In the end, she was red as a tomato.

"Now get up," Kris said. She got up, rubbing her bottom. "Go on with you now, I have things to do!" She practically skipped from the great room back to her window seat, their "punishment" complete.

With Haley out of the room, Kris straightened up the sofa, tucked in his shirt and turned to go grab his car keys to begin his weekend errands when his foot landed on something soft--the negligee, abandoned again on the concrete floor of the loft.

Which One Are You? 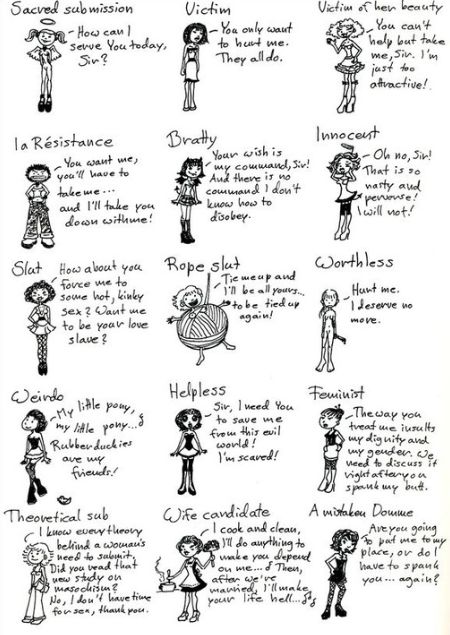 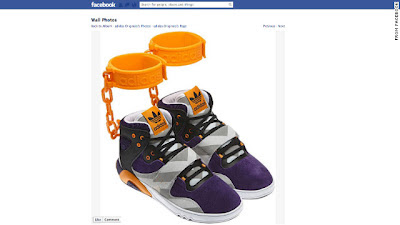 Adidas introduced a new shoe, called JS Roundhouse Mids, on their Facebook page. Their tagline had something to do with owning shoes soo cool you had to wear rubber shackles to keep them from getting stolen. First off, lame idea to begin with. Secondly, the interwebs began flaming about the (obvious) connotations to slavery. But, with Fifty Shades of Grey so popular, this lame consumer concept got me thinking: what if BDSM items became more mainstream? Some of us remember the 70s when the ribbon choker, inspired by Victorian fashion I assume, were big--or later in the 80s when punk rock brought studded leather chokers and dog collars to the scene (and now even that is hot with Girl with the Dragon Tattoo). 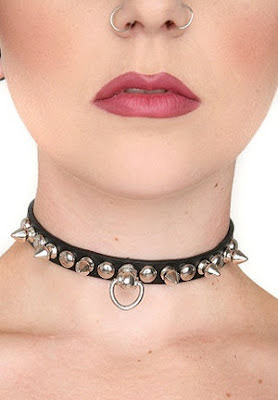 Why not dog collars and leashes for committed couples, in public? Might be a bit difficult to get around the local mall if that idea took off, but why not? Or restraints as a fashion statement. I could see it. It's not too big of a leap to go from this: 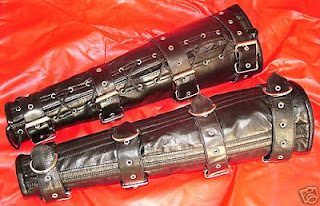 After all, remember this beloved cinematic character? 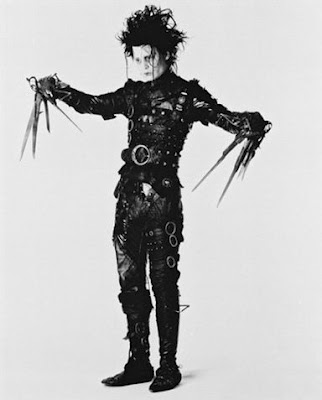 I know many a young lady who swooned over Edward's sensitivity and vulnerability, and only a few of those I'd call goth. 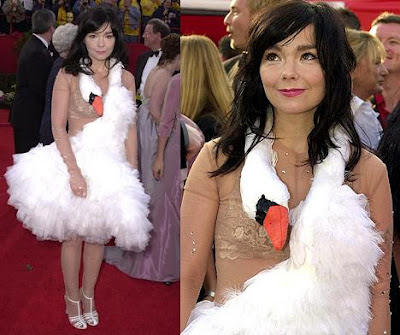 Sadly (though not surprisingly), Adidas pulled the peek at their upcoming shoe off their Facebook page and announced the shoe would not be appearing in stores in August as originally planned.

Postcards from the Edge 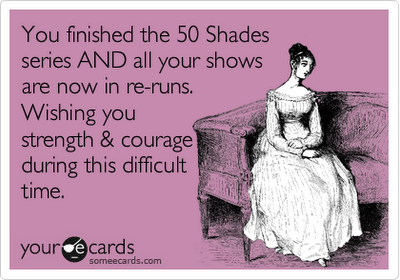 
Alright, alright! I give! After many requests, here's some new kink fiction: 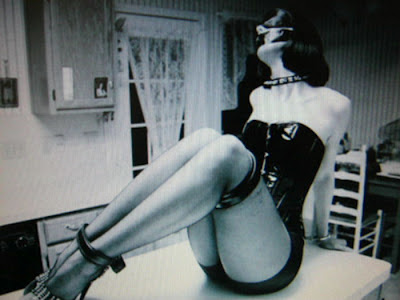 “Come here,” he said to her. She had been put into position wearing nothing more than knee-high black boots, restraints on her ankles and wrists and a thick black leather collar. She did have a stainless steel metal plug in her bottom that curved up toward her tailbone like a handle. It had been inserted some time ago. When it went in it had been so cold, but now her body temperature had warmed it and she had grown accustomed to it inside her.

He was sitting in a black leather chair, eyeing her stand in that position for some time. She moved to him, dropping to her knees and placing her forehead on his feet, as she had been taught to do so long before. She then held that position while he stroked her hair. “Are you ready for more?” he asked. There was no response. “You may speak.”
“Yes, sir.”

“I thought so.” He reached down and grabbed the handle of the plug and jiggled it. She made a small mewing sound at that. “Get up, my slut,” he said, yanking on the plug to pull her to her feet. She whined at this, but got upright and he followed, rising up. He slapped her face, hard. “Hurry!”

“Oh, you’ll be sorry,” he said. He grabbed the stainless steel handle and took her over to a spanking bench. He affixed her ankle and wrist cuffs to it so that she was bent over the padded bench, her bottom in the air, the handle point out and upward. He began slapping her all over—her neck, her back, her shoulders, arms, legs and mostly her bottom. Her skin stung everywhere. He was harsh, the slaps hard and unyielding. “You are a very bad girl!”

He yanked the plug from her and she could hear the muffled sound of it dropping onto a towel on the floor. Then she felt it’s terrible kiss—the dragon tongue. He struck her bottom again and again with it. “Now you'll get what you deserve,” he said, “because you’re going to bleed again!” He sounded so angry! The leather from the dragon’s tongue cracked against her skin, loud snapping sounds like a whip in the darkness. He hit her again and again and again without a break.

She heard him move from her then, wondering if that was it—if the punishment was over for her. She heard him return. She couldn't turn to see him from her position across the bench and the restraints holding her in place. Then, without warning, there was an enormous thud on her bottom. It was the canemore—the terrible, thick bamboo cane easily an inch in diameter, so nicknamed because it was a cane…and more. He laid into her sweet spots again and again with the canemore. She felt like she was going to be one enormous purple bruise, but still he continued and she took it. She deserved this. She needed this.

He switched to her other side and struck her again, making sure the blows where even on both sides so the canemore wouldn’t just favor her left side more than the right. She felt him touch her skin with his fingertips, inspecting. A few places stung, obviously the spots that had bled. He was gone again, then returned once with something else that felt whippy and stung like a wasp. It cracked against her skin and he covered her butt cheeks with little snap, snap, snaps of the implement. He’d start a rhythm and she would think she could ride with them, then he’d slow down but go more intensely, then speed up again. She couldn’t even relax into it. He was being so cruel! 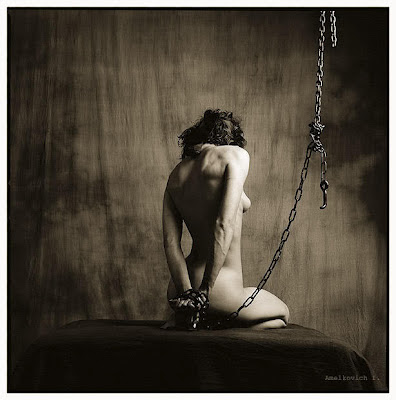 Another cane, this was starting on the bottom of her feet! The cane tapped away on her soles, sending them aflame, then moved up the back of her legs, up to between her thighs, across her hips, up her back—careful to miss her ribcage and spine—and on to her arms. Then he returned to her bottom and, placing a hand on her tailbone to calibrate, sent the cane whipping through the air and striking her flesh again and again. It was too much to bear! She burst into tears, but still he didn’t stop. And he never used his hand—her favorite!—as a “reward”. Always implements and, it felt, mostly implements she dreaded or hated.

She cried and breathed into it, taking it all, absorbing it up into her. And then it was over. He dipped his finger into her. “Wet little slut,” he said. “You were enjoying that.” She presented to him, thrusting her hips up toward him.

He swatted her ass then, as hard as he could, just once. “Not tonight, whore. You don’t deserve it.” He released her restraints. She didn’t move. She knew not to. He went around to her head, knelt down in front of her and held her face in his hands.

“Do you want to be my good little girl?” he asked.

“Well, you are,” he said, kissing her on the forehead. “You did a very good job with your punishment.” He stroked her hair. “Now, I’ll go make you dinner while you bathe. If you’re good, you might get that fucking you want later. But first you’ll have to sit on the hard wood chair naked during the meal, understand?”

“That’s my girl,” he said, removing the restraints in their customary ritual before heading to the bathroom to run water into the tub and then to the kitchen to begin prepping dinner. She glowed, touching her bottom and looking in the bathroom mirror at her rear. She smiled to herself. It had been a terribly harsh scene, but now she was a good girl again, the bath waited for her, and soon a lovely dinner would be made. She’d have to suffer the wood chair, but even that would be exquisite.

MyHabit, a membership seller like GILT that's part of Amazon have reproductions of Saturday Evening Post cover art from the 60s on sale. I love the era for art and I love the retro styling in particular. Two of the pieces felt appropriate to share with you all. I'll let them speak for themselves. 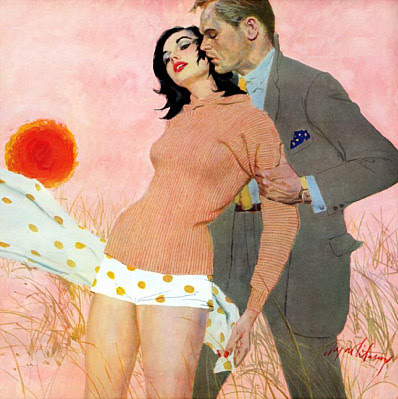 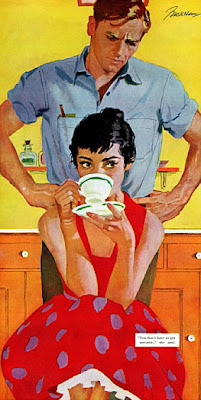 Okay, I've been quiet the last two weeks. Why? Well, since the middle of May I've been to:


And no, not all in one trip. In six entirely separate trips. So...genuine apologies for being a bit of a kink blog desert.

In the mean time, enjoy some shovelware for y'all: 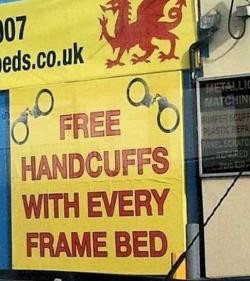 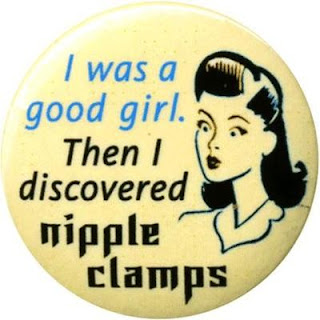