She walked into the bar in her skintight bodysuit, replete with built-in hood and face mask, leaving only her jade green eyes and pouty red lips exposed. Her gravity-defying breasts and long slender legs were easy to spot beneath the stretch black lycra. She stood in the doorway in her calf-high black Docs, legs spread, and surveyed the room as she licked a peach flavored lolly. 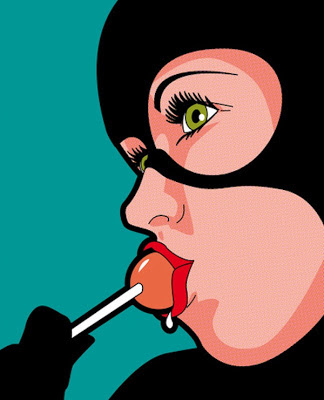 Certainly there would be a superheroine that would be looking for someone just like The Black Mask. She'd been feeling a bit naughty, and thoughts ricocheted around her head as she surveyed the scene. HQ was a pickup place for masked avengers, to be sure, but The Black Mask also knew that this particular bar leaned more toward the sapphic and, even more specifically, toward the kinky.

She marched up confidently to the bar, ordered a gin gimlet, and planted her firm ass cheeks on the edge of a black bar stool built out of a decommissioned WWII-era bomb, fins and all. Drink in hand, she looked around the room again. Some of the dark booths were full of C&L (capes and leotards) in a wide variety of cuts, colors and chest logos. She was looking for a single superheroine who could tame her for the night, but all the braun she saw were paired up...or were with groups...or worse, with groupies dressed in skanky supposed "sidekick" costumes of the store bought variety.

The Black Mask had been working hard as of late—restoring justice, dishing out a little good old fashioned American Patriotism—that sort of thing. So after a week or two of Type A, bitch-in-charge, crack the whip virtue and honor, she just wanted to let loose, get out of her head, relax and get her ass spanked. After all, she was feeling a bit naughty and needed to be over a sexy superheroine's lap for some old fashioned OTK. A strong, gloved hand on a bottom you could forge cutlery on was in order. In short order. As in now.

The Black Mask squirmed a bit just picturing it. It make her damp.

"Excuse me," a voice purred from behind The Black Mask, startling her out of her daydream a bit. She turned to look at the redhead. Fiery, dyed red hair. Equally pouty red lips. Wearing a strapless superheroine two piecer covered in scales.

"Mighty Trout," the ginger replied matter-of-factly. "You must be The Black Mask."

"I am," she said, sucking on her lolly between sips of gimlet. "Mighty Trout. I haven't heard of your exploits."

"I'm new in town. May I?" Mighty Trout gestured at the bomb next to her. The Black Mask shrugged and MT sat down on the retrofitted stool.

"New in town? You must be lonely." The Black Mask attempted to make her eyes as wide as she could without looking cartoonish. Which is hard to do in a black mask.

"I am. I was hoping to find someone in need of some personal discipline."

"As opposed to the usual public kind we dish out?" she asked, suddenly draining her cocktail.

It didn't seem unreasonable to end up at MT's headquarters, also known as her small studio apartment in the Castle District. The Black Mask knew what she wanted, but could also tell Trout was nervous.

"Have you spanked naughty girls before?" The Black Mask asked, coming up behind MT after she had lit a few votives around the room.

"I have. It's just...you intimidate me. I've followed you since you were a sidekick for Ms. Freedom Ring."

The Black Mask moved up behind Mighty Trout, kissing her neck. MT leaned into The Mask's touch, accepting her touch. 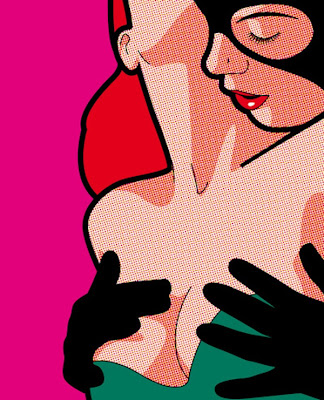 "Now, what I really need is a good spanking."

Mighty Trout turned then, grabbing The Black Mask's wrists, pulling her toward her as Trout stepped back toward the sofa and sitting down. Mask arched her back, presenting her perfectly round bottom to MT and her iron-strong hand.

After the spanking, Mighty Trout got up, helping The Black Mask to her feet.

"Woooh," The Mask said, woozy. "That was, uh, amazing, Mighty Trout." She kissed her on the mouth, slowly, a thin tendril of saliva connecting their lips as she pulled away. "You tamed this naughty girl." She had a smirk on her face, but it wasn't from a place of disdain. She was smitten.

"I should get to bed," Trout said, hugging The Black Mask politely. "It's been a busy day of, you know, crime fighting and such."

"Not so fast," The Mask said. She spun Trout around, sliding her hands across the superheroine's breasts and down toward her crotch. "I think I have some other justice to serve after that." 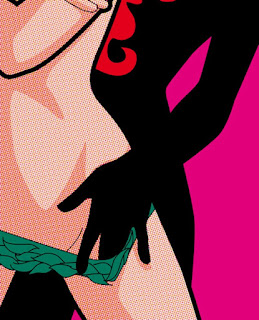 I'll Have Fries with That 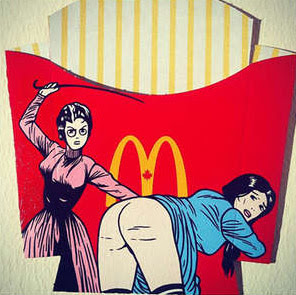 Looks like McD's in Canada (you can tell from the red maple leaf in the middle of the Golden Arches™) is serving up a little discipline with their Big Macs. I don't know about you, but I'd like to serve up some fries with that. 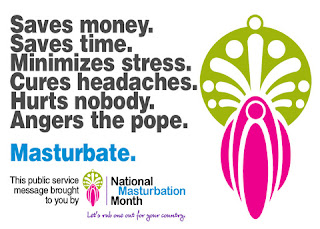 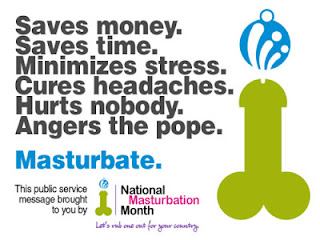 So get to it, people! I'm doing my part!

So recently I read about slapping a girl's inner or outer thigh so hard it leaves a long-lasting red mark. I've done this for ages but didn't know it was a "thing." So I told Lizzie about it last weekend when we were driving around doing errands and she had shorts on. Nearing our lunch destination (where we were meeting my kids) we decided to give it a go.  At the stoplight I lined up, raised by hand and whack! One single blow, as hard as I could muster in my midsize SUV.

Within seconds the red mark of my hand raised up on the flesh of her inner thigh. But then, something else appeared. Something odd. You could see the bones of my fingers and hand, as plain as day, in white like a stencil within the red of my hand. Once Lizzie stopped seeing stars and finished little o's of breath, we both looked in curious wonder at this: 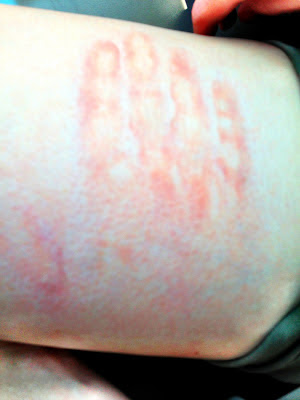 So I've decided to dub this "Xray Hand." It's my gift to you girls. Anyone want an Xray Hand need only ask when they see me in person at a party or private event. I'll gladly put one on your inner or outer thigh.